In this one-on-one conversation, Pascal Plante shares his insider view on the pressures of competitive swimming, casting and shooting in the pool, and unpacks the central  dilemma of Nadia, Butterfly’s character study: following expectations or blazing your own trail.

Missed our screening? Nadia, Butterfly is available to rent or buy on Google Play, YouTube, or iTunes Store. 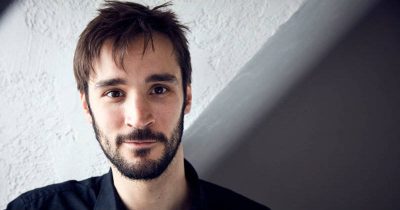 Pascal Plante is a Montreal-based filmmaker whose first narrative feature, a punk romance entitled Fake Tattoos, competed at the Berlinale, in Generation 14plus, in 2018. After his graduation from Concordia University’s Mel Hoppenheim School of Cinema, Pascal co-founded the production company Nemesis Films, with which he directed numerous short films including BLAST BEAT (Slamdance 2019), Blue-Eyed Blonde (Best Canadian Short Film VIFF 2015), and Nonna (Slamdance 2017). Pascal considers himself like a cinephile that became a narrative filmmaker with documentarian tendencies. His latest feature film, Nadia, Butterfly, has been included in the official selection of the 73rd edition of Cannes Film Festival in 2020.

Claudia Hébert is a radio host and culture reporter for Radio-Canada, sharing her time between Toronto and Montréal. She is also a filmmaker, having directed many short films.