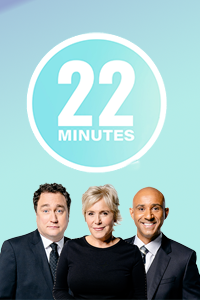 This Hour Has 22 Minutes

This Hour Has 22 Minutes is an iconic comedy show armed with razor-sharp political commentary, biting parodies, incisive social satire, and an unrelenting skewering of the weekly news. Starring Mark Critch, Aba Amuquandoh, and Trent McClellan, the iconic wit, sardonic attitude, and critical expertise of 22 Minutes has been an enduring staple for audiences across Canada for more than a quarter of a century. The longest-running comedy in Canadian history and one of the country’s top-rated comedy shows, 22 Minutes has been recognized with numerous awards over the years, including the Canadian Screen Awards Academy Icon Award. 22 Minutes has also won several Canadian Comedy Awards, including Best TV Show. A multiplatform hit, the show has a dynamic digital presence that allows fans to watch entire episodes online, view highlights and full sketches on Facebook, read jokes and up-to-the minute commentary on Twitter, and engage with photos and videos on Instagram. The show’s social media outlets are updated continuously and – by reaching millions of fans, new and old – generate considerable buzz.