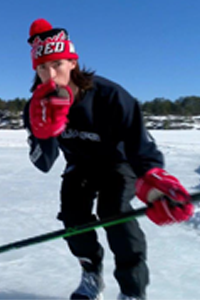 Hockey trick shot specialist Zac Bell or @alwayshockey as he’s known on social media has over 240,000 followers on Instagram and over 445,000 on Tik Tok. The 20-year-old Bracebridge native was on track to play to division 1 hockey in the United States and his ultimate dream was to play in the NHL. Injuries forced him to quit hockey but he came up with a new dream. He decided to devote his life to his new passion, trick shots. The reaction to his incredible skills has been amazing and Zac’s goal is to show everyone that you don’t have to make the NHL to have a career in hockey.