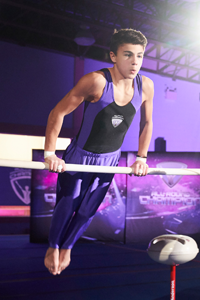 In season three, ten of the best young athletes in North America will assemble to compete in the ultimate sports competition. However, they won’t be competing in their own sports; they’ll be competing in each other’s to see how proficient they can become in a new sport in a short period of time. To reach this goal, they must excel beyond their own expectations. They must learn new skills, persevere and overcome their own physical and mental limits. The athlete with the most points at the end of the series will be crowned the All-Round Champion.