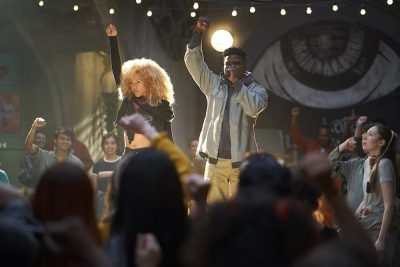 Utopia Falls - "The World Is Yours"

UTOPIA FALLS is a one hour, scripted, serialized, music oriented, science fiction series. The series is set in NEW BABYL, an isolated, dystopian future society believed to be the only remaining colony of humans on earth after a catastrophic event called THE GREAT FLASH destroyed the world?s digital technology. The series follows ALIYAH, an independent and adventurous teen girl, who through her pursuit of winning the coveted EXEMPLAR competition, is exposed to HIP HOP, an ancient, unknown form of musical culture, and begins to question everything she has ever known. Thus begins her thrilling journey of self discovery that will change the world she knows forever. Take a dystopian young adult adventure series like the DIVERGENT, remix it with the musicality and dance of STEP UP, and mash it with the generational conflict of THE 100, and you get a sample of what to expect from UTOPIA FALLS, a fresh, thrilling, genre bending take on the classic teenage coming of age story.