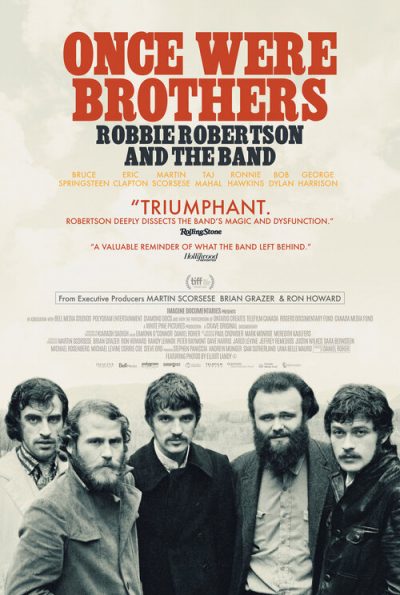 Once Were Brothers: Robbie Robertson and The Band

Once Were Brothers: Robbie Robertson and The Band is a confessional, cautionary, and occasionally humorous tale of Robbie Robertson’s young life and the creation of one of the most enduring groups in the history of popular music, The Band. The film is a moving story of Robertson’s personal journey, overcoming adversity and finding camaraderie alongside the four other men who would become hi brothers in music and who together made their mark on music history. Once Were Brothers blends rare archival footage, photography iconic songs and interviews with many of Robertson’s friends and collaborators including Bruce Springsteen, Eric Clapton, Van Morrison Martin Scorsese, Peter Gabriel, Taj Mahal, Dominique Robertson, Ronnie Hawkins, and more. In a career spanning six decades, Robbie Robertson has continued to create as a songwriter, producer, performer, actor, author and film composer. A half-Mohawk, half-Jewish kid from Toronto, Robertson would travel from the dives of Yonge Street to the deep South as an ambitious 16-year-old on a musical mission. His raw talent would thrust him into the spotlight and put him at the centre of a cultural revolution, backing Bob Dylan on his notorious 1966 “electric” world tour and later, as a member of The Band, collaborating with Dylan on the ground-breaking Basement Tapes and inventing Americana with songs like “The Weight,” “Up on Cripple Creek” and “The Night They Drove Old Dixie Down.” After 17 years, The Band called it quits with a lavish farewell concert on November 25th, 1976, at San Francisco’s Winterland Ballroom, immortalized in the seminal concert film, The Last Waltz, directed by Martin Scorsese, considered by many as the greatest rock and roll film of all time.