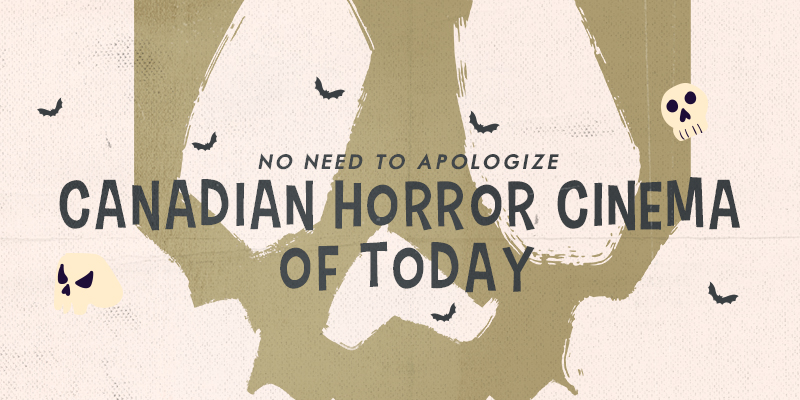 I’m standing at the corner of Caroline and King Street in Hamilton, Ontario (I’m here directing the Shaftesbury produced Netflix series Slasher). I watch a GO bus scream by and notice on its destination marquee one simple word, “SORRY.” If you’re from out of town and see this, you know exactly where you are: Canada. We Canadians are known to apologize for just about anything, including being successful.

Canadians have an unapologetic legacy in creating the horror genre, and our filmmakers today are continuing in the tradition. The name David Cronenberg will certainly dominate any conversation of Canadian horror movies and their history. Cronenberg’s filmography is rich and includes such classics Rabid, Dead Ringers, and The Fly to name just a few. His role in Canadian horror has been extremely well documented, and his legacy cemented in the genre.

Did you know that it was the Canadian film Black Christmas that was the inspiration for John Carpenter’s MASSIVE horror classic Halloween? Directed by Bob Clark, the film’s influence on Carpenter’s masterpiece can be seen in the use of that amazing POV shot, used again and again in both films. Carpenter thought Black Christmas was ground-breaking and the legend goes that when Carpenter asked Clark about his ideas for a sequel to the film, Clark answered that since his original took place during Christmas, he would assume the next one would take place over Halloween. John took that idea and ran with it, creating what is now part of the Mount Rushmore of horror movies, Halloween.

Other classics include Ginger Snaps, My Bloody Valentine, and Bruce McDonald’s fantastic zombie picture Pontypool (of which Guillermo del Toro is a fan). Canadian women have also contributed significantly to the genre (and I am not referring to the actresses who evade knife-wielding killers, but the filmmakers themselves). The Soska sisters burst onto the scene with the indie sensation Dead Hooker in a Trunk and followed that up with the now cult classic American Mary. The sisters are now shooting a remake of the Cronenberg horror film Rabid; if anyone can do this remake justice, it’s the twisted twins.

Our legacy runs deep, but is anything happening in Canadian horror cinema today? The answer is a resounding “yes,” and in a big way. This year alone, multiple Canadian films have stood out in the landscape, one being the Quebec-based Canadian Screen Award nominated film, Les Affamés directed by Robin Aubert, the film is beautiful and subverts the genre. An emotionally rich story, Les Affamés is a quiet study of the human condition which reaches blistering results, but if you strip away all the horror elements, the film remains a  brilliant drama nonetheless, and because of this, films like Les Affamés secure such accomplished actors as Marc-André Grondin. As a viewer, I couldn’t help but feel my heart ache to witness a small boy hiding in a tree from his family, who are standing below waiting to devour him. The genius lies in the way the scene is shot – in the way the story is told with such skill that you see yourself in that tree; you see your child in that tree clinging to life – truly heartwrenching.

Another Canadian film that has emerged as a game-changer is What Keeps You Alive, written and directed by Colin Minihan: a wonderfully dark and twisted relationship goes horribly wrong when a woman’s true self is revealed while vacationing in the beautiful Canadian wilderness. The film is sharp and stylish with athletic camera movements and a sexy, intense soundtrack, and just like in Les Affamés, it’s the acting that stands out. The film could have emerged as a run-of-the-mill movie of the week, but after the long and haunting tracking shot which opens the picture, you know you are in good hands. There are no gratuitous sex scenes, no boring one-liners, no tired jump scares…just a gut punch of emotion that leaves a strong and lasting impression.

As for Les Affamés’ 2018 Canadian Screen Awards nomination, it was for Best Motion Picture. Yes, that’s right, a Canadian zombie film nominated for best picture. That is truly incredible, as it shows that change is happening in favour of Canadian horror films; as they get better and better, carrying deeper meanings with strong underlying themes, these emotion-filled films are then worthy of such great drama, a welcome departure from the former tactic: “how much blood and sex can we put on the screen?”

This year, in a New York Times article entitled “Home Is Where the Horror Is,” Jason Zinoman proclaimed that “we’re in the midst of a golden age of grown-up horror.” A more mature horror style has been dominating the screens, with such films as A Quiet Place, The Witch, Goodnight Mommy,Hereditary, and the only Canadian film on The Times’ list, Pyewacket (written and directed by yours truly) taking a prominent slice out of the silver screen. Reviews and some articles have mentioned that Pyewacket is the horror version of Lady Bird, a humbling statement for sure. It is an honour to see my film among such greats, something to celebrate and be proud of.

Funny to think that Les Affamés, What Keeps You Alive, Pyewacket, and Backcountry (my other feature which was also nominated for a Canadian Screen Award) all have the backdrop of the Canadian wilderness; truly Canadian indeed. Write what you know, they say – well, we are.

Les Affamés holds an 88% fresh rating on Rotten Tomatoes, What Keeps You Alive holds an 80% fresh rating, and Pyewacket? 85% fresh. Horror films having this many positive reviews have historically been a rarity. As a horror filmmaker, I consider this worthy of celebration and as a Canadian, it leaves me with absolutely nothing to apologize for.