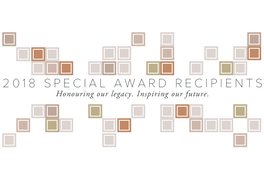 The Academy of Canadian Cinema & Television announces the 2018 Special Awards Recipients to be awarded on Sunday, March 11, 2018

TORONTO | MONTREAL, October 30, 2017 – The Academy of Canadian Cinema & Television today announced the nine Special Award recipients who will be honoured at the 2018 Canadian Screen Awards. The award show will be broadcast live on CBC from The Sony Centre for the Performing Arts in Toronto, Ontario on Sunday, March 11, 2018 at 8 p.m. EST (9 p.m. PT/ 9:30 p.m. NT).

Peter Mansbridge – Lifetime Achievement Award – for his exceptional lifetime of work, which has had a profound impact on the media industry in Canada and abroad.

Margaret Atwood – Academy Board of Directors’ Tribute – for her commitments to the growth of the Canadian media industry.

Jay Switzer – Academy Board of Directors’ Tribute – for his commitments to the growth of the Canadian media industry.

Clark Johnson – Earle Grey Award – awarded for his exceptional impact on the strength of the industry at home and around the world.

Rick Mercer Report – Academy Icon Award – for its ongoing contribution to the media industry within Canada and globally.

“The brilliant and unparalleled works of this year’s honourees have impacted us, not just in Canada, but around the world – each provide threads of diversity and courageousness in the fabric of Canada’s culture,” said Beth Janson, CEO, Academy of Canadian Cinema & Television. “The Academy is honoured to recognize their decades of outstanding and important contributions that have pushed boundaries and set new standards that will inspire generations of Canadians to come.”

For full details on the Academy Special Awards.

ABOUT THE ACADEMY of CANADIAN CINEMA & TELEVISION | www.academy.ca

The Academy of Canadian Cinema & Television is a national, non-profit, professional association dedicated to the promotion, recognition, and celebration of exceptional achievements in Canadian film, television, and digital media. Unifying industry professionals across Canada, the Academy is a vital force representing all screen-based industries.

For full bios, images and/or to set-up an interview with Martin Katz contact: